Event is open to

Homa Sarshar discusses her new book “A Narrative of Endurance.” She also touched on the Iranian women’s movement and demonstrations organized by the Iranian diaspora in support of protests in Iran over the past four decades. This talk is in Persian. About the book: “One can find and obtain knowledge, albeit incomplete, of the footprints of nations and people in cemeteries discovered hundreds of years after their presence in the region. Years later, when a curious passer-by reaches the city of angels and visits each of the cemeteries in the city, they will know that at the end of the twentieth century and the beginning of the twenty-first century, immigrants lived in the city, among them numerous artists, intellectuals, academics, geniuses, political activists, and tireless fighters, who had departed their country or had escaped the prison of the Islamic Republic when the candle of the existence of some of them was soon extinguished. The tombstones of their eternal resting place, each in the cemeteries of Los Angeles, Berlin, Paris, London, and other cities, narrate a great historical migration, and so great that counting them all is no easy feat. The name of each of these greats, buried in foreign soil, reminds that passer-by of what happened to this immigrant tribe and the narrative of their legacy.” Homa Sarshar is a published author, award-winning journalist, writer, and media personality. She is the author of several books and the editor of eleven other volumes, including five volumes of the Iranian Women’s Studies Foundation Journal and four volumes of “The History of Contemporary Iranian Jews.” Her book “Sha’ban Jafari” was the number one best seller Persian book in Iran and abroad in the year 2003. From 1964 to 1978, she worked as a correspondent, reporter, and columnist for Zan-e Ruz weekly magazine and Kayhan daily newspaper in Iran. During this period, she also worked as a television producer, director, and talk show host for National Iranian Radio & Television. In 1978, Sarshar moved to Los Angeles where she resumed her career as a freelance journalist, radio and television producer, and on-air host. An established women’s rights activist, she served a five-year term on the board of the Iranian Women Studies Foundation, has worked with Human Rights Watch, her two-volume memoir (“Dar Koocheh Paskoocheh Ha-ye Ghorbat”) was the first publication of a Jewish Iranian memoir, one of the first Persian memoirs after the revolution published outside Iran, as well as one of the very few examples of memoir-writing by an Iranian woman at the time of its publication. In 1995, she founded the Center for Iranian Jewish Oral History (CIJOH) in Los Angeles, a nonprofit organization that gathered over 1,600 historically significant photographs and documents, and recorded over 120 oral interviews with elders and leaders of the community. In 2006, she founded Honar Foundation to provide social and financial support to all Iranian American artists in need to ensure that these unique talents are served in the best way possible and their lives are improved. Throughout her 50-year career with Iranian and Iranian-American print, radio, and television, Sarshar has done more than 3000 interviews and has produced and anchored as many radio and television programs. She has also written, directed, and produced a collection of twenty video documentaries on exiled Iranian writers, poets, and artists, some of which have been acquired by the Library of Congress for the library’s permanent audiovisual archive. 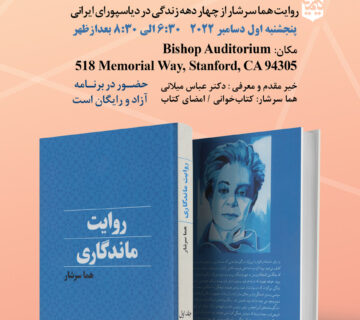 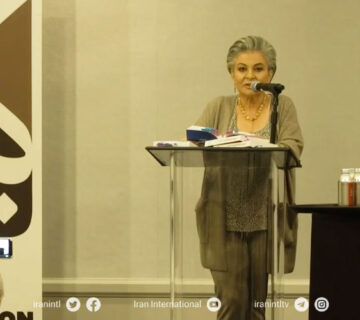